As I said in a prior post, I won this as a physical book from Goodreads. I entered a contest and actually won! I would not have entered the contest if the book hadn’t been written by one of my favorite authors because 1) I don’t do dtb now that I have a Kindle and 2) I rarely read YA books — notable exception being the Harry Potter series. The Hunger Games series is still on my TBR list even though I have bought the Kindle books. 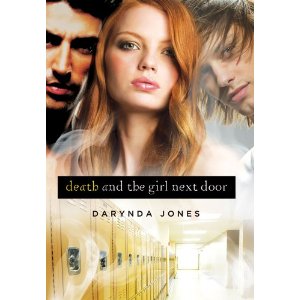 Darynda Jones‘s Death and the Girl Next Door is set to be released October 2, 2012. I finished reading it early this morning. It’s a story that centers around 5 people who attend the same high school. Three are best friends, one is the loner from the area, and one is the new kid in town. Most of that you can get from the book description on the back cover, That’s all the detail I will give because spoilers suck and not well.

I loved the dialogue, especially between the three — Lorilei, Glitch and Brooklyn. The bit that takes place in the house of a certain über-wealthy family regarding the molding used in the rooms is classic Darynda Jones. As frequently happens when I read one of  her books, there’s a point when I reach for something to stuff into my mouth to keep from laughing out loud and disturbing others in the area. This was one of those points and yes, snorting my beverage was an ugly side effect.

I particularly loved the plot technique of taking legend/folk-lore/myth and using it as a base for the story. The author does not rigidly adhere to the legends, but uses them as the golden thread while weaving the tale. Jarad’s “real” name and Cameron’s biological father’s name are indeed the stuff of legend and teachings. It gives a feeling of reality in an otherwise fantastical plot. Hey, it’s supposed to be fantastical. After all, that is genre — YA paranormal fantasy with a nice dash of romance.

The only thing that bothers me about this book is that I have to wait a year to read the next in the series, Death, Doom and Detention.