I was at the doctor’s office the other day, sitting in the waiting room and … you know … waiting. There were two men talking. One got up and went in for his appointment. The other gentleman started to talk to me.

As it turns out, this man graduated two years ahead of me. That means we both have the reunion coming up. That also means he graduated is Dan’s class. And, of course, he knew Dan. Quite well, actually. As he was called into the office, he asked me to tell Dan “hello” the next time I talk to him.

I had to then explain that Dan was no longer with us. I thought about spending the evening at the upcoming reunion, answering the question “why?” over and over. Add that to it’s on the same day as summer graduation, which means I’ve got to figure out the care and feeding of mom from at least 7:00 am to 6:00 pm. I don’t want to add any more time away for the day.

I go in to my appointment and the doctor says to come back in a week. They appointment they give me is the 25th — smack dab on the anniversary.  Yes, Dan’s talking to me. He’s being positively chatty!

Driving home I go past the old high school, which is in the process of being torn down. I now have an unobstructed view of what used to be the interior courtyard. It’s the one that people were forever telling Dan, as Student Council President, that they should plant flowers. Which prompted the captioning in the yearbook of the photo below “If one more person comes to me, wanting to plant posies in the courtyard, I will personally shove an eggplant up … ” 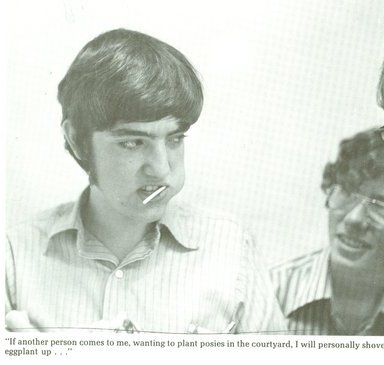 I love and miss you, bro. Every. Single. Day.