A) Several times a week, I go to my favorite coffee shop — Rothrock Coffee. The owners are wonderful; the coffee gods and goddesses are some of the nicest people in the world; the coffee kicks ass!

But now I’m wondering if I go there too often. Nah. Not really! But last week I worked graduation. The weather was wretched and it made students late and harried. In short, it was tougher than usual. To make matters worse, Rothrock opens after I have to be at work and closes before I get out. Yes, there’s coffee at the venue, but it’s not Rothrock coffee.

Sunday, I went to the shop per usual and it was closed! For a private event! The horror! They were having an employee holiday party for family and friends!

Ok. Seriously, no worries. I think it is great they were doing that, so I turned and walked back to the car, knowing they’d be open the next day. Suddenly, I hear my name called. I was being beckoned back to the shop. When I got in there, I was handed my usual large latte. OMG! They knew my name AND my beverage of choice. Sort of like “Cheers,” but for coffee. I was over the moon! When I told this to a friend of mine, she suggested maybe I went there a little too often.

So today, the day before Christmas, they closed earlier than usual for a Saturday. I got there and the chairs were up, the door was locked, and the baristas were cleaning up.

Again, no worries. I think it rocks that they were giving their employees a couple extra hours. I’ll be back. I’ll always be back. But, no! One of the owners again called to me and asked if I wanted something to go. Caveat: All they had were cold drinks.

Like I care? I got an iced latte. Maybe I do go there too often. Pfft! No way! I’ll be back there on Monday. A Merry Christmas and a big ol’ “thank you”to all the caffeine elves at Rothrock!

B) On my way home, I passed on of the roadside crosses they put up when someone was in an accident at that spot. Swooping down in front of me was a red-tailed hawk. I couldn’t tell if it was a juvenile or a female. It landed on the cross and sat looking around. Too much symbolism. I don’t want to think about that too deeply.

C) Driving through a neighborhood near me, there are 12 families who put up the “12 Days of Christmas” decorations. There’s a sign in the yard of one family and another just like it further up the street. In the dark, driving along, I haven’t been able to read the sign. Today I went past, stopped at the curb and read the sign. 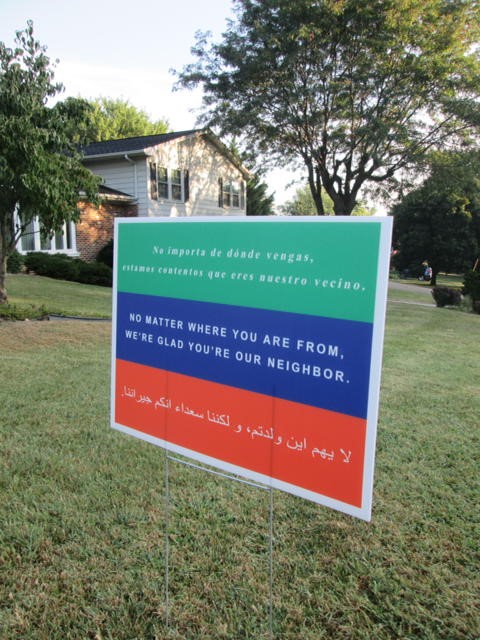 One thought on “Just a few observations”