They do not mix! As a general rule, there is way too much sun in cemeteries on nice days. When it gets brutally hot, like today, don’t even attempt them. All the things you think of for beating the heat are either not available or downright banned.

I went looking in Union several days ago. The bell had me intrigued. I went early-ish morning. Predawn is a no-no. Most are “closed” dusk to dawn. The reason for this is not that they don’t want ghost hunters. I think caretakers would be fine with ghost hunters.The problem is vandals and unfortunately vandals often claim they do vandalism while “searching for ghosts.”

Anyway. Back to the bell. I got a look close up and personal. several things came to light on closer inspection: a) The arch doesn’t have any inscription at all. b) The arch is placed parallel to the iron gate entrance. c) The bell is wooden. 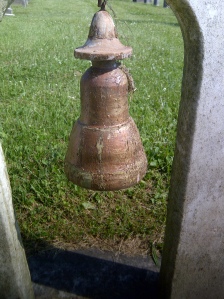 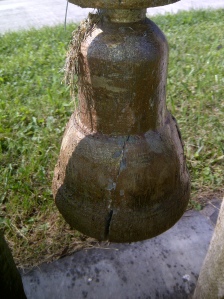 I found a couple flag markers I hadn’t seen before. The first is from the Spanish-American War veterans. Apparently this one is rather rare. 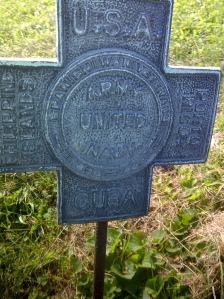 I got the Puerto Rico and Cuba parts. It was the Philippine Islands that made my brow furrow for a moment.

The next rare flag marker is one from the KGE — the Knights of the Golden Eagle.  Ta fraternal order founded in 1873, they are much like the Masons. Their claim to fame is that one of their members assassinated McKinley. 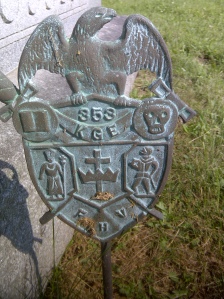 Now, how freaky is this?

The skull looks like it has a bow in what would be its  hair — if it weren’t a skull. Or like a bow tie got twisted. All the images look a bit child-like, as if they asked a member’s 4-yr.-old son (in that era, a fraternal order wouldn’t ask a daughter) to draw their emblem.

I have to get back there as soon as the weather breaks a bit. There are zinc markers I need to inspect!